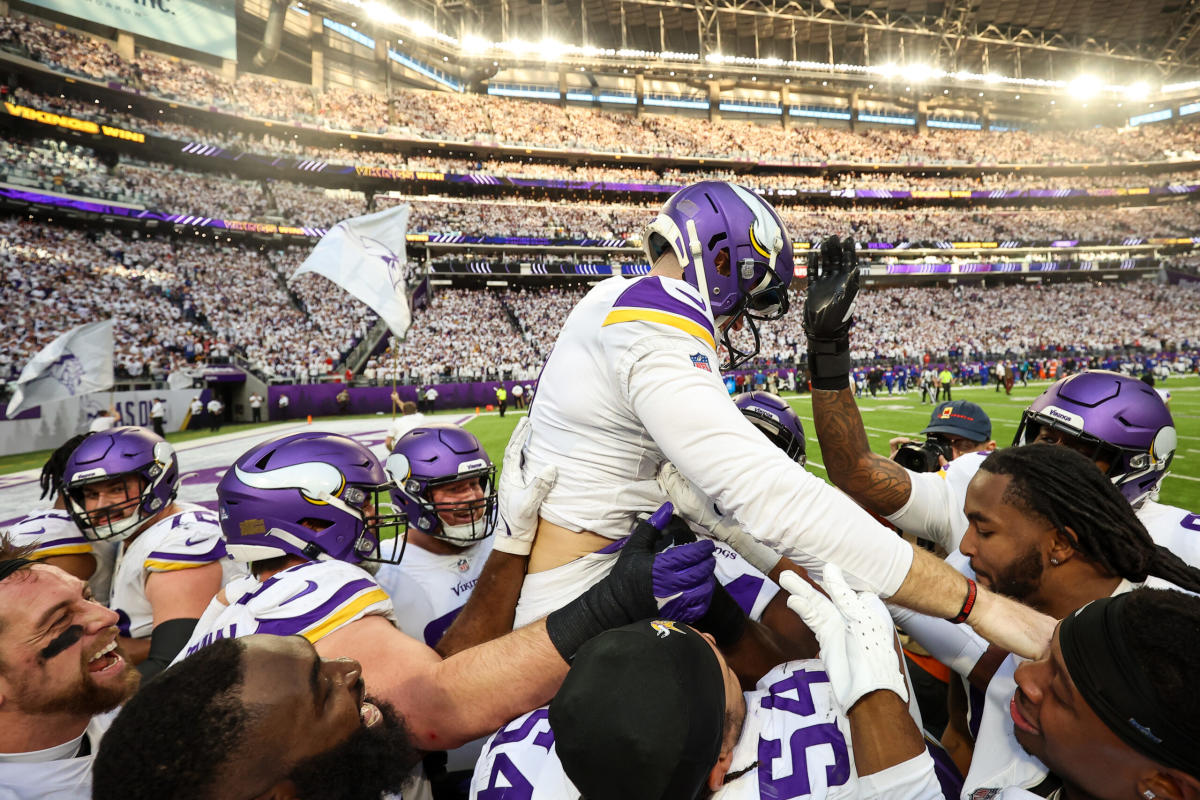 Yes, we are living in a world where the Minnesota Vikings are 12-3. But, it’s not a Christmas miracle, it’s our actual reality.

In the first 15 games, the Vikings have been up and down in getting to an .800 winning percentage. The one thing they have done is break records.

The Vikings continued that on Saturday against the New York Giants and broke multiple records in the final home game of the 2022 regular season.

Vikings receiving yards in a season

One of the many records that superstar wide receiver Justin Jefferson has broken this season came in the 15th game and he surpassed Hall of Famer Randy Moss in doing so. In 2003, Moss had a tremendous season with 1,632 yards and Jefferson broke that on his first catch of the day. He is on pace to break Calvin Johnson’s receiving yards record of 1,964. He currently has 1,756 yards on the season and is less than 250 yards away from the first-ever 2,000-yard season.

Vikings receptions in a season

The Vikings have a tremendous lineage at the wide receiver position and Jefferson is already proving to (potentially) be the best of them all. He caught his 123rd pass on the season, breaking the 122 receptions that Cris Carter hauled in during both the 1994 and 1995 seasons. Carter went to social media after the game to congratulate Jefferson on his accomplishment.

Most one score wins

There are quite a few metrics that are unsustainable and one of those is being successful in one-score games. It is something that many analysts and pundits have criticized the team for and have praised the fact that it isn’t sustainable. I don’t think the Vikings care much about that, as they became the first team in NFL history to win 11 one-score games. It’s a pretty impressive feat to be so successful in close games, but the focus on situational football has been the key.

The Vikings have had some consistent issues at the kicker position and that has also been the case this season. Kicker Greg Joseph has been much-maligned this season, but he came through big in the Vikings’ 27-24 win on Saturday. He made all three of his extra points and both field goals, but the 61-yarder to win the game was both a career and franchise record. He didn’t just kick it, but he hit it hard and had a few yards to spare.

The Vikings haven’t just had issues at the kicker position. Joseph has also made up for it by coming up big in clutch moments. To go along with his 61-yard game-winning kick, Joseph has four other game-winning kicks and his five kicks are a franchise single-season record.

Most wins in first season as head coach

After last Saturday’s win against the Indianapolis Colts, the rookie head coach record belongs to Kevin O’Connell as he surpassed Dennis Green with his 12th win on the season. O’Connell might not get a lot of votes for the Coach of the Year Award, but the job he has done this season is something that deserves appreciation.