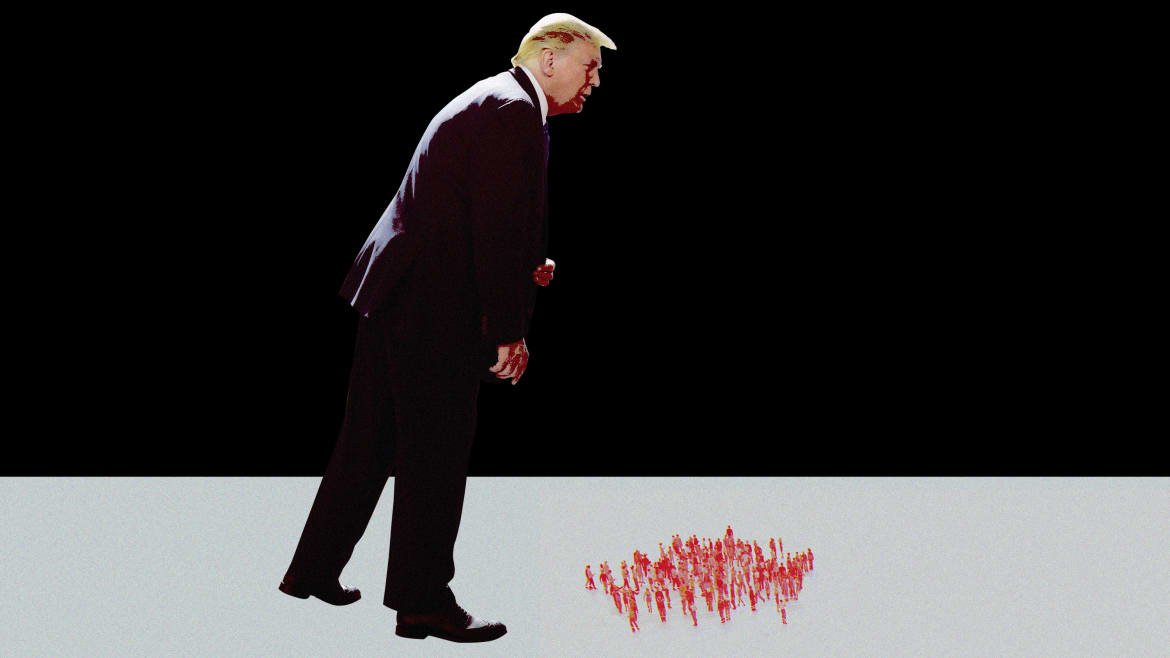 There’s a famous scene in Austin Powerswhere Mike Myers runs over a security guard with a steamroller. What makes this horrific act funny is that the steamroller looks to be going about 2 mph, and the security guard (who is at least 30 feet away) just stands there yelling “STOP!” for what feels like 10 seconds before he is, inevitably, squashed.

I thought of this scene recently when contemplating the nascent 2024 Republican presidential primary. Everyone can see Trump, who is a disaster, lumbering in slow motion. The key to avoiding the fiasco he represents—for the country and for the GOP—is both simple and obvious.

Keep the field small. Get the hell out of the way.

One member of Trumpworld even went so far as to tell The Examiner“Basically, we’re praying Nikki Haley runs.”

And why does Trumpworld want a crowded field? Something like 30 percent of Republican voters, by some estimates, are “ride or die” with Trump (in recent USA TODAY/Suffolk University Poll, Trump garnered 33 percent of the vote in a head-to-head with DeSantis). This suggests that Trump would likely lose in a head-to-head matchup with a MAGA adjacent candidate But the bigger the field, the more likely Trump’s 30+ percent is to put him over the top as everyone else collects the scraps.

It’s easy to imagine a scenario where DeSantis, Haley, Glenn Youngkin, Tim Scott, Asa Hutchinson, Mike Pompeo, Liz Cheney, Larry Hogan, Kristi Noem, and Josh Hawley (just to name a few) all run. This could splinter the non-Trump vote and guarantee that The Donald wins with a plurality.

Not that anti-Trump conservatives like me should pin all their hopes on, say, DeSantis. We’re still a year out from any voting; we don’t even know if he’s even going to run for president. And even if he does run, we don’t know if he can take a punch or how he will perform on the hustings. It would be crazy to put all our eggs in one DeSantis basket.

It’s also true that sometimes the candidates we think will be rock stars (see Fred Thompson and Rick Perry) falter, while longshots (see Bill Clinton and Pete Buttigieg) can win or at least make a name for themselves.

For this reason, I was once a fan of the let-a-thousand-flowers-bloom theory of presidential campaigns. Sadly, 2016 highlighted all of the problems associated with such a large field. As such, for the good of the nation and the party, Republican candidates should avoid frivolous vanity campaigns meant to boost their stature.

Choosing to run in a crowded primary against Trump in 2024 is a very different moral choice than it was in 2016. Unless a candidate has a credible path, it’s almost certainly going to help Trump. And after all he’s done (ie, Charlottesville, The Big Lieinciting the Capitol Riot to stop the peaceful transfer of power, dinner with antisemitesetc.), that kind of self-indulgence is unacceptable.

This isn’t the time to run for office just to try and get a book deal or some visibility. Candidates choosing to run for the GOP nod in 2024 must be realistic about their chances of winning—and about the spillover effect of their vanity project.

Nikki Haley fits this category. By trying to be all things to all people she has, I suspect, managed to alienate most Trumpers and Never Trumpers. She probably can’t win, but she can steal some votes from someone like DeSantis—which is why Trump’s minions are reportedly praying she runs. Likewise, Mike Pence also needs to accept reality. As MSNBC Morning Joe co-host Joe Scarborough recently said of Pence“It just comes down to the fact that he doesn’t understand—it’s like a political version of The Sixth Sense. He doesn’t know politically that he’s dead.”

“The first principle,” as the physicist Richard Feynman said, “is that you must not fool yourself, and you are the easiest person to fool.”

Since there are numerous incentives to run, maybe the more realistic plea would be for likely doomed Republicans to get running for president out of their system in 2023, and then (assuming they don’t gain steam) drop out before the first primary votes are cast in 2024.

Still, self-interested or delusional candidates might rationalize that they will catch fire later. Who could forget Rudy Giuliani’s disastrous strategy that hinged on losing everything until Florida?

Once again, Republicans face a collective action problem. They would all be better off heeding my advice, but individual interests discourage it. Absent a party boss who can force cooperation, we are left with this question: Will those Republicans who now understand how dangerous another Trump term would be for America put the country first?

If potential candidates really love this country, they need to consider sitting this one out—or getting out of the way early—to prevent disaster. Otherwise, we all get rolled.

Read more at The Daily Beast.

Get the Daily Beast’s biggest scoops and scandals delivered right to your inbox. Sign up now.